Perhaps one of the most significant news of what is happening in Israel today has more to do with what most of the world does not know than what is generally known. We’re talking about the search for oil in the Promised Land and its long-prophesied impact in the “last days.”

“Israel is currently undergoing an oil and gas exploration boom,” reports Dardik Gross & Co. law firm in Israel, in a post on their website entitled Oil and Gas Exploration in Israel. “Recently, Israel has seen some of the world’s largest discoveries of gas and oil. These new oil and gas discoveries have jumpstarted significant foreign investment into drilling and exploration rights.”

“Discovery of oil in ISRAEL means the Jewish state could soon produce ‘significant quantities’ of ‘black gold’… and potentially change the face of the Middle East,” the Daily Mail reported in October 2015.

We could present a full Biblical review here of the prophetic scriptures that address the matter of a forthcoming major oil find predicted for Israel, but we choose rather to give that spotlight to our friends at Zion Oil & Gas, Inc. Led by its founder and visionary John Brown and headquartered in Dallas TX, Zion O&G (NASDAQ: ZN) is on a mission of biblical proportions and prophetic vision.

For more information and regular updates from the region, click the caption below… 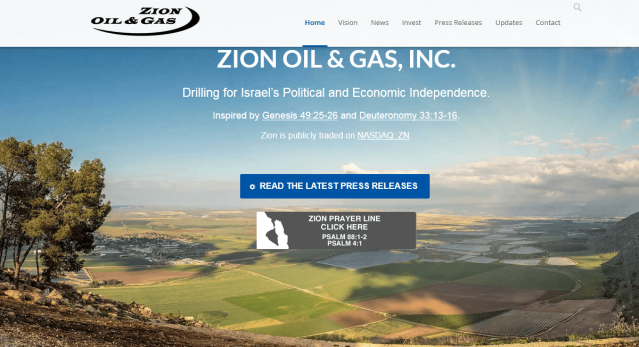