“Our March into a New World”

Posted on April 14, 2013 by therevelationfile 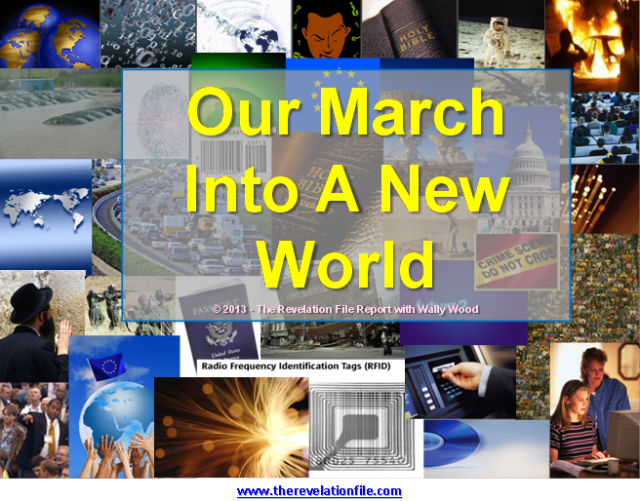 The prophecies of scripture point to a time when the very structure of the world will be changed. In the midst of much global conflict, there would emerge a brief time when the majority of nations will be under the strong delusional influence of a world leader unlike any that have gone before. Under his direction, a new world system would be established in which nation-states would merge into a single central command. National currencies would be abolished, and the “Rule of Law” would be managed by advanced pervasive technologies that would border on such divine attributes as omnipresence, omnipotence, omniscience … plus one more — omniveillance (since 2009).

This presentation will show how close we are to the fulfillment of these prophecies!

That future is now!

The Revelation File is hosted and edited by Wally Wood in Houston TX. It began as a daily radio news commentary over the Sonlight Radio Network from 1980 to 1984 and, in 1985, over KSBJ in Houston, as part of the Christian News Network that Wally had started at the time. The “RevFile” eventually became a nationwide subscription news service to the body of Christ in the late 1990s ... and has expanded still further to include the quarterly "Revelation File News Forum" at Encourager Church in Houston. To receive The Revelation File newsletter by email, send your request to: info@revelationfile.com. For more information about the Forums, see details on the "Events" page of this website, or go to the "Contact Us" page to schedule a Forum event for your church.
View all posts by therevelationfile →
This entry was posted in End-time Bible prophecy, Events Archive and tagged events, May 19, new world, revelation file. Bookmark the permalink.