Constitution for the Federation of Earth (1977) 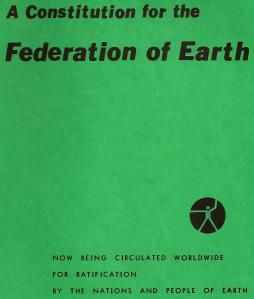 Produced and introduced by the World Constitution and Parliament Association of Lakewood, Colorado in 1977, the theme of the document was “World Democracy: The Rational Alternative.”

The document is 50 pages in length containing 14 Articles, 43 Sections, and 135 signatures from 25 nations.

Introduction
“At a World Constituent Assembly meeting from the 16th to 29th of June, 1977, at Innsbruck, Austria, participants from 25 countries of all continents debated and adopted the draft of A CONSTITUTION FOR THE FEDERATION OF EARTH. We, the participants in the Assembly, together with other supporters, now submit the Constitution for the Federation of earth for worldwide ratification by the nations and people of Earth.”

“Realizing that Humanity today has come to a turning point in history and that we are on the threshold of a new world order which promises to usher in an era of peace, prosperity, justice and harmony;

We, citizens of the world, hereby resolve to establish a world federation to be governed in accordance with this Constitution for the Federation of Earth.”