And he causes all, the small and the great, and the rich and the poor, and the free men and the slaves, to be given a mark on their right hand or on their forehead, and he provides that no one will be able to buy or to sell, except the one who has the mark, either the name of the beast or the number of his name. Here is wisdom. Let him who has understanding calculate the number of the beast, for the number is that of a man; and his number is six hundred and sixty-six.

As the days draw ever closer to the prophesied events of the “last days” as the Antichrist makes his appearance and then, finally, the return of the Lord Jesus Christ, the ultimate reach of electronically tagging every human on earth will become increasingly prevalent. Society will become increasingly inoculated against the onslaught of extreme technology to the point that, when the politics of the day demand it, the grand mass of humanity will readily yield to the law that will demand the electronic tagging of every consumer and employee in the land.

On this page, we show an Index of posted articles and publications that address these matters.

Wally first coined this word in 1998 and online dictionaries began picking it up in 2007. The Merriam-Webster Online Dictionary credited him with “coming up with a new word in the English language.” Click HERE for more historic information and global trending of “Diginomics.”

“The new global situation is turning the world upside down. The economy for the Age of Networked Intelligence is a digital economy.”

“Tangible money, old-fashioned money … is a phantom from the past, an anachronism. In its place is an entirely new form of money based not on metal or paper, but on technology, mathematics, and science. This new ‘megabyte’ money is creating a new and different world wherever it proceeds.  Money now is an image.” 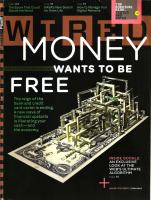 “Unfortunately, the world’s governments remain stuck in the past … In an era when books, movies, music, and newsprint are transmuting from atoms to bits, money remains irritatingly analog. Physical currency is a bulky, germ-smeared, carbon-intensive, expensive medium of exchange. Let’s dump it.”
~ David Wolman
WIRED, May 5, 2009
“Time to Cash Out”